2. Disconnect the coupling, remove the positioning pins on the flange of the fan housing, and remove the bolts.

4. Check backward from the coupling end one by one to check whether there is any damage to the parts and whether there is any deviation in size and clearance. Record the problems found, and then mark the position of the entire rotor in the fan, including the various components in the front and rear bearing housings, and finally lift the rotor out.

5. After removing the rotor, clean the bearing seat, check for wear, and measure the upper and lower bearing seat together to check whether it is still within the tolerance range. If there are obvious scars or out-of-tolerance ranges, replace them in time.

6. If the bearing parts, such as; bearings, positioning rings, sealing bodies, sealing rings, end caps, etc. if there is problem, replace that one.

7. After the replacement, re-install it according to the mark before dismantling, ensure the order, and assemble the whole machine after the position is correct.

8. Fill the bearing with lubricating oil.

9. Check that the cavity of the upper and lower casings is clean and free of debris, the seals at all levels are installed in place, the upper and lower marks are the same, the lower half bearing seat is installed on the lower half casing, then the rotor is transferred, and oil is added in the oil chamber, and finally, the bearing seat is installed In the first half, put the positioning pins on the tightening bolts, and fasten the front and rear covers.

10. Manually crank the car to check whether it is flexible and scratched. If there is no problem, finally install the upper half shell, put on the positioning pin to tighten the bolt, and install the coupling to start the test drive. 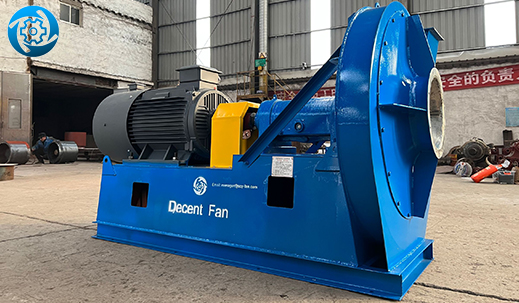 Conducted pre-factory testing today for a shredder blower for a UAE customer.

Conducted pre-factory testing today for a shredder blower for a UAE customer. And send the test report and test-related pictures and videos to the customer. Company with a healthy family heritage of well over 100 years blended with its corporate values and strengths, Hassani... read more

Chinese traditional spring festival-the New Year is coming. We formally holiday from 2020.1.23 to 2020.1.30. You can leave us a message during the holiday or contact the members below. Mr.Tony Tel:(+86)18560381695 Email:[email protected] We are online 24 * 7 hours to provide the services. Welcome to send new inquiry to Decent Machinery. read more

People are afraid of two things: First is quality and it is obvious. Second is communications. Because they think that if communication is not good during negotiation, in future in case of problems it could only be worse. Thus people are afraid if they see that... read more

A corner of the company

Today I will introduce our company environment and culture. Upon entering the door, our customer’s photo wall attracts attention. Next is the employee office area，the busiest place in the company. The most casual place is the tea room，various snacks, drinks and other things. There is also a small... read more

01 In the rainy season, pay attention to the paint stripping of the dust removal equipment Due to the influence of factors such as light, rain, sand, and air, the dust collector equipment used in the open air will easily fall off the protective... read more

To further meet the needs of our customers for low noise fans, the company’s independent research and development of the technology department of ultra-low noise fans after repeated tests, has been through the noise of the fan products quality supervision and inspection center and... read more

Pakistan customer with 40 years history visited us and placed orders for us today.

Pakistan customer with 40 years history visited us and placed orders for us today. After the tour in our factory and meeting, the customer sets a high value on us and hope to have long term cooperation in the future. read more

Online communication with customers in the Philippines mine

A laboratory test of the blower ordered by our Thai plank manufacturing plant customer was conducted today. The blower purchased by the customer is used on a 20-ton boiler. The first is to test the air volume and air pressure data of the fan,... read more

On January 27, 2022, our company obtained the certificate of ” axial flow fire smoke exhaust fan” (jet fan) issued by the Fire Protection Product Conformity Assessment Center of the Ministry of Emergency Management, the model is SDS(R)-12.5. The jet fan is a new type... read more